In many cultures around the world, a Picture Jasper Tumbled Stone is valued for its deep connection to the Earth. As a nurturing and protective stone, the picture jasper meaning brings comfort by alleviating fear, stress and anxiety Jaspers have been revered by ancient peoples and civilizations throughout the world as sacred and powerful stones of protection, for both the physical and spiritual realm. They were known as the “rain bringers” and nurturers, healers of the spirit and stones of courage and wisdom. The name can be traced back in Arabic, Persian, Hebrew, Assyrian, Greek and Latin, and the virtues of Jaspers have been extolled throughout the ages by the most noted physicians, magicians, poets, scientists, lapidaries and scholars.

Picture Jasper, a remarkable form of Brown Jasper, is characterized by masterful “scenes” and landscape patterns formed by Nature, and is believed to contain hidden messages from the past. It was revered in many cultures of the world for its deep connection to the Earth, its protection during shamanic journeying, and its ability to divine the land and the future. It is perhaps more closely connected to the planet than any other Jasper and is known today as the Stone of Global Awareness. Highly attuned to the Earth’s electromagnetic fields and energy systems, Picture Jasper provides a remarkable ability during meditation to merge with the consciousness of Earth. It allows access to the vast records stored within the planet’s mineral database, and may be used to view the world’s history and connect with the energy of sacred sites and ancient civilizations. It encourages ecological responsibility, and acts as a reminder that one is not here on the physical plane simply for oneself, but to bring joy and substance to others.  A nurturing, protective stone, Picture Jasper brings comfort and alleviates fear, stimulating not only the Base Chakra in providing physical and spiritual energy for the body, but also activates the Third Eye Chakra enhancing visualization. It instills a sense of proportion and harmony, enlivening one’s creativity and initiative, and is a marvelous talisman for bringing hidden emotions to the surface for healing. Picture Jasper is an opaque, microcrystalline variety of Quartz with extraordinary color banding, veining and depositional flow patterns created by petrified or silicate mud and sometimes dendritic inclusions. On cut or polished stones, these variations appear as detailed images or “scenes.” Because of its unique landscape patterns and wide range of colors, Picture Jasper is one of the most sought after and famous varieties. It occurs in nodules or as fillings in fissures and may be found the world over, usually named for the specific localities where it is mined. Picture Jasper’s earthy colors are due to high iron content and other minerals or impurities that create its artistry. It forms most often in shades and combinations of brown, gold- to reddish-brown, black, blue, tan or ivory, though other colors may be present 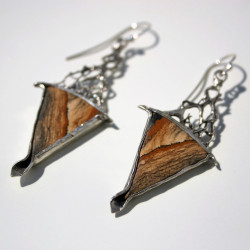 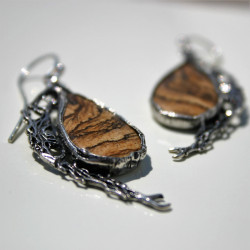 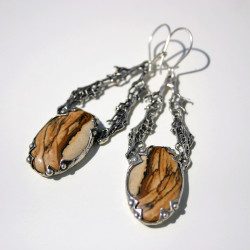