The Red Garnet is known as the stone for a successful business. It is believed that if a garnet is put under a pillow it will cure depression. Garnets can be used to make a person popular and have self-esteem when worn as jewelry. It helps protect one on trips. Garnets bring consistency to friendships. Garnets are also known for stimulating success in business Garnet comes in many colors, but now we will speak only about red Garnet. The Garnet is associated with the thyroid and spleen. It helps cleanse and purify both when held over the area. The Garnet is usually held in the hand or placed on top of the head when searching or meditating on past lives. Information that is beneficial and helpful will usually be released for the searcher. The Garnet is a stone of purity and truth as well as a symbol of love and compassion. The information released in a search may be painful, but it will always be what the searcher needs. The Garnet will help everyone’s security level and spiritual awareness.It can help increase the sex drive. There are countless beliefs regarding the various benefits of wearing a garnet to promote good health. In ancient and medieval times, the symbolism of color played a very important part in recommending the use of particular stones for special diseases. In the case of red stones, they were thought to be remedies for hemorrhages of all kinds, as well as for inflammatory diseases. Garnets were worn to enhance bodily strength, endurance and vigor. It was widely believed to be extremely beneficial to wear a garnet when one had to exert oneself. Garnet was also thought to relieve skin conditions and regulate the heart and blood. It was thought to be healing for either gender. For men, it keeps the reproductive system healthy. For women, it promotes hormonal balance and is said to reduce swelling. Garnet has long believed to cure heart palpitations, lung diseases, and various diseases of the blood. Traditional folklore creates a strong link between the red garnet and blood. It is believed that a garnet tones the spleen, promotes health throughout the circulatory system and enhances the body’s production of healthy hemoglobin. It stimulates metabolism, treats spinal and cellular disorders, purifies and re energizes the blood, heart and lungs, and regenerates DNA. It also assists the assimilation of minerals and vitamins. There are many beliefs in the power garnet has over the not just physical health, but mental health as well. Garnet’s virtues have been long believed to include passion, true friendship, fidelity, success, self-esteem, loyalty, devotion, energy, faith, consistency, and truth. The stone also sharpens your perception of yourself and other people. Long ago, garnets were claimed to help the wearer resist melancholy and warn off evil spirits, especially spirits of the night, which were referred to as demons and night phantoms. Today we might interpret this as a stone that can ward off nightmares. Garnet is also said to inspire contemplation and truthfulness, and offers its wearer the power to protect their standing and possessions. The garnet is also an ancient symbol of friendship. In the past, garnets have been exchanged between parting friends to symbolize their affection and to ensure that they meet again. In some circles of belief, it is said that a garnet’s magic cannot be accessed unless the stone has been cut and polished. 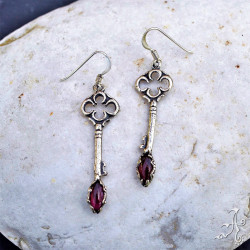