An energy stone as popularly called as, Red Goldstone is often mistaken for being a mineral, but it is actually a glittering from of glass which was produced long ago as a result of an accident done by a human being. In other forms, we can say that it is a man-made glittering glass.According to folklores, an alchemist during his experiments, or a monk while producing a secret recipe mistakenly poured copper shavings into molten glass, which produced an element which was hard and glossy in nature and characteristics. This incident explains the trade names for this gemstone, such as monk gold, gold flux, monk's stone, and even goldstone itself.Goldstone, in the past, was known as Aventurine glass, which has been taken from its Italian name “adventuring”, which literally means “accidental”, “by luck, or “by chance”.Goldstone is thought to be the stone of aspiration and ambition. It instils liveliness, energy, audacity and an optimistic attitude. It increases the urge to achieve something, and confidence to accomplish any task. A soothingly healing stone, Goldstone is believed to promote vivacity and vitality. 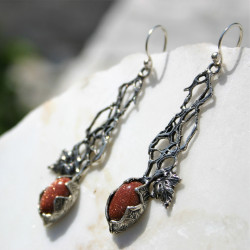